Hospitals Use Mystery Patients to Improve the Patient Experience

To improve the quality of their care, some hospitals are asking a La Jolla based firm to spy on them
BY BRAE CANLEN

arbara Gerber has a quirky sore throat. It starts hurting as soon as she enters the emergency room, but the pain stops right after she leaves. Her miraculous recovery even allows her to sit in the parking lot and dictate notes into a small tape recorder.

Gerber is a faux patient hired by hospitals and physician offices that want an inside glimpse of their organizations. Her La Jolla based firm, Devon Hill Associates, has a core of 25 sleuths in its nationwide network. While “mystery shopping” is nothing new to the hotel, retail, and banking industries, in healthcare it’s still seen as a cutting-edge concept.

“Hospitals are looking for ways to differentiate themselves on the service they provide,” she says. “Many of my clients have already identified possible problems through patient surveys, and they want to know exactly what’s being said and done.”

A former assistant hospital administrator, Gerber saw the importance of this line of work in 1987 when, as a long-term care marketing consultant, she would, on occasion, send undercover shoppers into nursing homes to observe sales staffs. Then in 1992, after undergoing surgery, the idea occurred to her: Why not use mystery patients to evaluate medical encounters, as well? She researched the idea for about a year, then put it on hold for three more.

Gerber’s healthcare sleuths now include an attorney, a nurse, a former hospital administrator and a financial consultant. They visit hospital emergency rooms and outpatient clinics with pre-assigned identities and illnesses. They subject themselves to everything from lab work to hard plastic chairs. And, along the way, they note just about every kind and harsh word that’s encountered — all in the name of medical verité.

On her last job, Suzanne Clayton (not her real name) visited the emergency room of a New Jersey hospital complaining of back pains. As usual, she carried a big purse stuffed with evaluation forms. In her jacket pocket she also carried a tape recorder. The forms would need to be filled out before she left the hospital. The tape recorder would furnish the final reports with quotes, if necessary. A marketing consultant by occupation, Clayton noticed everything from the paint on the ceiling (was it chipped?) to the wax on the floor (dull or shiny?). She also focused on the attitude of the staff. Did they make eye contact with her? Give her good directions to the rest room? And when it came time to see the doctor, was her name shouted across a crowded waiting room?

“I’m very healthy, so being in a hospital doesn’t frighten me,” says the 48-year-old Clayton. “But I don’t like needles, and I have problem veins.” She recalls one assignment where she was required to give blood — a true test for the hospital’s phlebotomist. “Here was this man coming at me with a needle,” she says. “I was just like a patient at that point.”

Clayton usually stops halfway through her visit and finds an unnoticed corner in which to go through her checklist. At the New Jersey hospital, she took notes in bathrooms and hallways between cardiology, the ER, and the lab. Six other undercover patients were seen in registration, radiology, and the family practice clinic. Their visits were conducted last fall at the behest of Bob Chaloner, president and CEO of Franciscan Health Systems.

“We were receiving complaints that the employees were brusque and we wanted to have the perspective of coming into the hospital through the patient’s eyes,” says Chaloner, who took over the Catholic two-hospital system last year. He tried customer-service seminars, but the staff was not receptive. “They saw it as ‘smile school’,” he recalls. Then a doctor suggested, jokingly, that the CEO disguise himself as a patient to see how he was treated. Around the same time, Chaloner read a New York Times article about Devon Hill Associates. He contacted Barbara Gerber, and at her suggestion, announced their plans to send covert patients through both Franciscan hospitals “sometime” over the next few weeks.

“The initial reaction was not real positive,” Chaloner admits. “Both the staff and the doctors felt we were spying on them.” But rather than obsessing on the means, hospital employees eventually focused on the findings. And, as it turned out, many of the customer-relations problems centered around the front desk, where employees were evaluated as gruff and unhelpful. They were also eating in front of patients. “We could sit down with employees and say, ‘Look at what we found,’” says Chaloner. 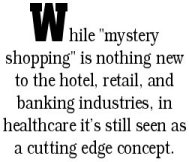 The findings weren’t all negative, either. Doctors, nurses, and technicians received high marks, for example, for patience, eye contact, and communication skills. There also was no shortage of bilingual staff to assist Spanish-speaking patients. Gerber presented a summary of the results to senior management last January, along with a set of recommendations. Then the report circulated through the various departments, and employee input was solicited. For her services, Gerber charged the hospital around $6000. “We were very happy in terms of what we paid.” says Chaloner. “It was a lot more valuable than some of the consulting studies we’ve done.”

So far, most of her clients have been hospital clinics in New York and New Jersey. She’s also evaluated outpatient services in Oklahoma, Maine, and Virginia. But this is one bandwagon that California hospitals have yet to jump on. In fact, as of April not one of her clients was from this state.

Still, as healthcare becomes more oriented toward customer satisfaction, it only stands to reason that the demand for Gerber’s services will increase.

Comanche County Memorial in Oklahoma had a program last year to improve customer service and shorten waiting times, and wanted to have it evaluated. So they called in Gerber’s company. “We wanted someone who could come in with an objective viewpoint and document it,” says CEO Randy Segler. He also sent Gerber to evaluate an off-site urgent care clinic, and has since signed up the company to do four more hospital visits. “Barbara has the tools and the knowledge to do this,” says Segler. “I think she brings a larger perspective to the table.”

Gerber trains her “patients” to be observant, detail-oriented, and innovative. And in these efforts she gets some help from her husband, a retired cardiac surgeon who advises her on medical conditions. “He tells me where they’re going to poke,” she laughs. And frequently Gerber will go undercover herself; she’s undergone several mammograms and once stood for 20 minutes in a cast while a receptionist checked her in. (Her crushed toe was a real injury, but the doctor’s appointment was a set-up.) She’s even gone as far as the operating table. “Only the surgeon and someone in senior management know I was a mystery shopper,” she says. And so, at the last minute, she announced that she had drunk some orange juice that morning, which prompted the doctor to immediately cancel the procedure.

Of course, to go this far it’s important to have accomplices on the inside who are in on the ruse. In fact, in an upcoming assignment, Gerber has enlisted a surgeon who agreed to give up three slots so her investigators could go through the surgical pre-admission procedures before canceling at the last minute.

Devon Hill Associates also visits medical facilities to see whether protocols and procedures are being followed. But Gerber bristles at the notion that she’s ensnaring errant employees. “This is not a ‘gotcha’ program,” she insists, noting that she has turned down several requests from TV programs who wanted to go “undercover” with her. She’s also passed on a job that involved spying on a competitor’s emergency room. “I had to make a decision early on as to whether I wanted to gather information on competitors or help hospitals improve themselves.”

Not everyone however, is convinced these undercover operations are constructive. “There are some very important elements missing from this,” says Rick Wade, a spokesman for the American Hospital Association. “These patients are not really ill, or in pain, or anxious — all of which can determine how someone perceives their care. (Mystery shopping) can only teach you some limited things about the service side of your operation.”

Brian Schilling of the National Committee for Quality Assurance also expresses reservations. “Spot checks are not a good way to get objective evidence,” he says. “It’s all anecdotal.” But, he adds, “There’s real value to customer impressions.”

Patients who grumble about long waits or abrupt treatment don’t always complain to the right people, Gerber points out. Cultural and language differences may also impede patient feedback. While some of Gerber’s clients are trying to document flaws, others are simply trying to raise the bar on customer service. At one hospital system, Gerber’s firm was hired to evaluate the efficacy of a diversity training program. Another healthcare organization used Devon Hill to critique employees’ attitudes towards low-income patients. The investigator showed up at several emergency rooms with $20, no insurance, and an injured back. “Every single hospital was pleasant about it,” she reports.

Gerber happened to be outside a Los Angeles emergency room last April when a piece of concrete dropped in front of her. Fragments flew into her face, and by the end of the evening she had stitches in her lip and a patched-up eye. But it was a learning experience for her companion, a new mystery shopper she was training that night. And the hospital — which was not a client — fared well. “At some point I’ll have to let them know that they did a good job.” Gerber says.

Brae Canlen is a San Diego-based freelance writer. Her e-mail is braecanlen@aol.com

Back to In Print.