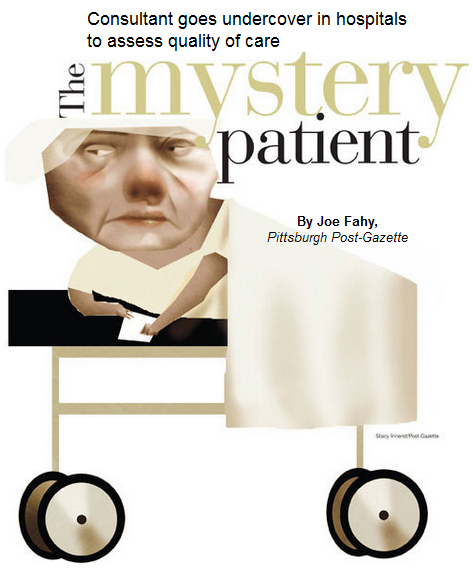 Left alone in her hospital room, Barbara Gerber spent much of her time taking careful notes about the details of her care. Or she hid in the bathroom, where she dictated her observations into a tape recorder.

Except she was justpretending to be sick, posing as a patient to help improve the hospital experience for patients who are really ill.

Hospitals use undercover patients provided by her company, Devon Hill Associates, to give feedback about the experiences that real patients likely will encounter.

The concept of using trained shoppers to anonymously evaluate service delivery, known as mystery shopping, is well-established in the retail and hospitality industries but is relatively unusual in hospitals.

“When people go into the hospital, the first thing they want is the very best medical care,” she said. “The second priority is to feel important — for the staff to listen, be caring and kind.”

Surveys or other tools that measure patient satisfaction may give hospital administrators an idea of problem areas. But mystery shopping can further pinpoint the cause, Ms. Gerber said.

At one hospital that had complaints about slow preadmission screening, Ms. Gerber, feigning to be a patient, noted that the screening area was combined with an outpatient surgery recovery area. Her company’s report noted that nurses were hard-pressed to serve both areas, and the sounds of recovering patients were upsetting to patients being screened.

“We made a significant difference,” Ms. Gerber said, noting that the hospital decided to provide those services in separate locations.

Many patients spoke Spanish, he said, so Ms. Gerber hired mystery shoppers who acted as if they could not speak English. Their observations led to a number of changes, including the hiring of bilingual staff at the front desk, he said.

“I think in our arrogance, we think we understand what the patient needs,” said Britt Berrett, another repeat customer and president of Medical City Hospital in Dallas. “We need to be humble enough to realize that a different set of eyes can provide tremendous insight for the needs of patients.”

While she often uses other mystery shoppers to help her, Ms. Gerber said she poses as a patient herself in every project. She has often appeared at emergency rooms complaining of imaginary symptoms. Once, she was on a gurney waiting to be taken to the operating room for cosmetic surgery when the procedure was called off, allegedly because she had eaten a few hours earlier.

In that case, the surgeon was aware that she was not a real patient. While a doctor’s cooperation is sometimes needed and the hospital staff is generally informed of a mystery shopping project, Ms. Gerber said she and her workers have always gone undetected in the departments they are investigating.

Noting that keeping a low profile is an important part of her job, Ms. Gerber declined to disclose her age. The only photos she shared showed her wearing a wig.

When she appears as a patient, she never uses her name and is careful to alter not only her appearance, but her personal history. “That’s why we’re never found out,” she said. “You have to be very careful.”

Ms. Gerber said she got the idea for mystery shopping in hospitals more than a decade ago, after she had a negative experience as a real patient at a Pittsburgh hospital she declined to name.

“I had gone in for some surgery and had a life-threatening experience,” she said, refusing to discuss the incident in detail.

She had a background in hospital administration, and her consulting business focused at the time on using mystery shopping to evaluate the sales effectiveness of assisted living facilities.

“I decided maybe I could combine the tools I had already developed on the long-term care side with my background in hospital administration, and put together a program that could help consumers have a better experience in hospitals.”

Since then, she has conducted mystery shopping in hospitals in more than a dozen states.

A Pittsburgh native, Ms. Gerber grew up in Squirrel Hill, where her father was a family physician and her mother was a homemaker.

She graduated from Allderdice High School, then attended Penn State University and graduated from the University of Pittsburgh. She and her husband, Dr. Michael Gerber, a former cardiac surgeon at Shadyside Hospital, have three grown children.

After her marriage, Ms. Gerber earned a master’s degree in library science at the University of Pittsburgh and became a medical librarian at Pitt. Deciding she wanted to be a health care administrator, she returned to Pitt and earned a master’s of public health in health administration.

“We need to be humble enough to realize that a different set of eyes can provide tremendous insight for the needs of patients.”

She worked for four years in strategic planning and physician recruitment at Aliquippa Hospital, then was marketing director for several years at Ohio Valley General Hospital.

William Provenzano, Ohio Valley’s president, remembered her as “bright, capable and energetic” and noted that she started a program for conducting physical examinations for corporate employees at the hospital in the 1980s.

He said that Ohio Valley has not used her mystery shopping service, though “it makes a lot of sense. When you’re up in management, you don’t always see things the way the patient sees them.”

In 1987, Ms. Gerber left the hospital to establish her own company, initially focusing on occupational health and long-term care. Though she and her husband moved to California more than a decade ago, she still works with several associates in Pittsburgh.

Demand is not greater, in part, because hospitals have other priorities and often “are very paternalistic,” she said. “The patient doesn’t have much control, and I think hospitals are reluctant to relinquish some of that.”

Part of the reluctance also is due to a misunderstanding of how mystery shopping can increase patient satisfaction, she said. Some hospital officials are concerned that some of their employees may feel they are being spied upon, she said

“In the hospital industry where mystery shopping is uncommon, it can still be perceived negatively by staff.”

Back to In the News.